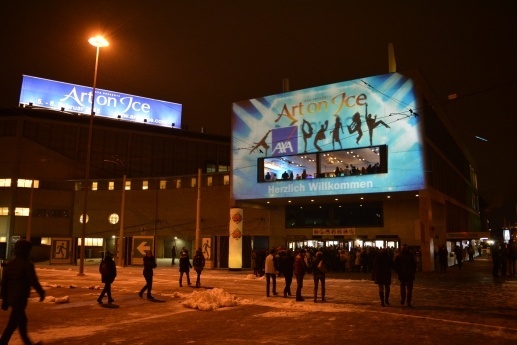 I attended Art On Ice for the second time since living in Zurich. I like figure skating, as many Russian-speaking people do I’ve noticed.

Art On Ice is a unique concept – it’s a combination of dance and music, choreographed to a figure skating show. I found it very special to watch how the musicians and singers interacted with the figure skaters during the show, and how the emotions and feelings of their music was presented through the performance of the skaters.

This year the guest starts were Nelly Furtado, Tom Odell and the Swiss singer Marc Sway. The partners of the show were Axa Wintethur, Swiss Casinos and VW.

The athletes were all well-known professionals in the world of competitive figure skating, for example, participating in the show were such Olympic champions as Tessa Virtue and Scott Moir from Canada, Gabriella Papadakis and Guillaume Cizeron from France, Russians Tatiana Volosozhar and Maxim Trankov, Ksenia Stolbova and Fedor Klimov, and the Swiss Sarah Meier and Stéphane Lambiel.

My favorite aspect of the show was being able to watch the sportsmen perform in person, which I feel is something that is usually accessible to the public only on TV. I also liked the fact that all the songs and music were performed live. Tom Odell was singing and playing the piano while Marc Sway and Nelly Furtado sang their hits accompanied by the Art On Ice orchestra. The dancing group and moderator also did a great job.

After the show I went to the after party that was held in the Swissôtel in Zurich Oerlikon. There all the stars were ready to give interviews and have their pictures taken. Marc Sway and Tom Odell even did a cool improvisation and started playing musical instruments and singing on the small stage in the party hall. The party was great; everyone enjoyed themselves and just had fun celebrating this unique and amazing event, Art on Ice.