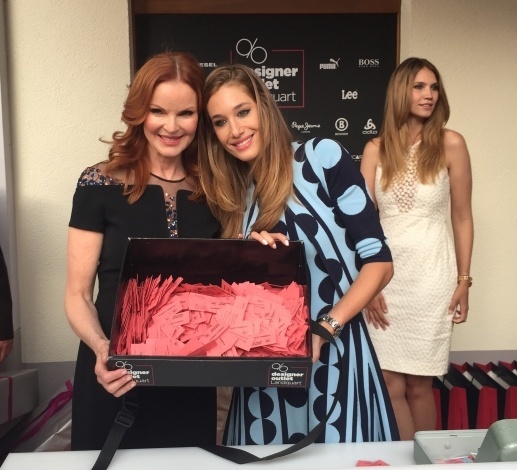 Designer Outlet Landquart held its second annual late night charity shopping event Saturday, June 13th in the Graubünden canton. Hollywood star, Marcia Cross, well-known for her role in the TV series „Desperate Housewives“, German TV moderator Thore Schölermann, Swiss model Bianca Gubser, Miss Switzerland 2010 Kerstin Cook, and freestyleskier Elias Ambühl were amongst the celebrity attendees. After a photo and interview session on the red carpet, they sold raffle tickets, took lots of pictures and selfies with fans and shared their thoughts on the event itself, shopping and Switzerland. All proceeds from the event were donated to the Swiss Children’s Cancer Foundation. Marcia Cross prepared a nice surprise for everyone by announcing that she would contribute double the sum of money collected by the end of the day.

I was amazed by how smoothly and nicely the event was organized! The invited stars were very open and ready to have a chat with fans, sign autographs, and encourage people to donate toward a good cause. Some people were lucky enough to win shopping vouchers to the outlet along with other presents.

Claudio Poltera, Center Director of the Designer Outlet Landquart, warmly welcomed guests, proud by the success of and strong turnout of their social charity campaign.

The event was great, and I was delighted that it was held at Designer Outlet Landquart as I’ve there many times. It is a one hour drive from Zurich, located in a mountain region with ski resorts, thermal springs and famous town of Davos. The outlet includes over 160 national and international labels, including Navyboot, Nike, Puma, Oakely, Tommy Hilfiger, Hugo Boss, Lacoste, Bogner, and others. I also like the style of the outlet village; the shops look like cute Swiss chalets, and moreover, it is open on Sundays 🙂