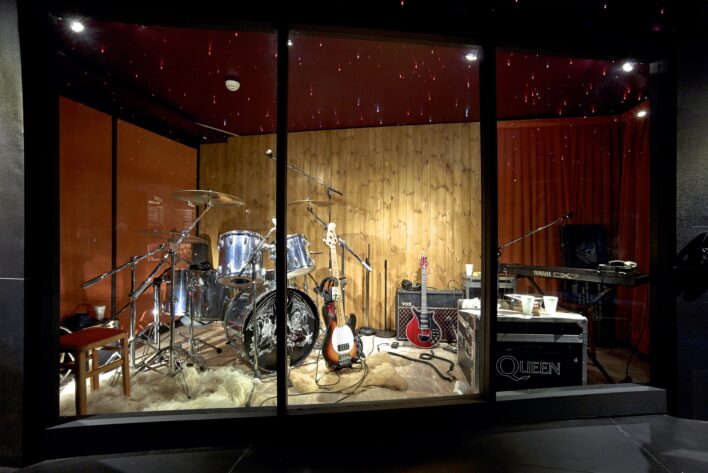 Queen: The Studio Experience in Montreux is an exhibition which gives fans a glimpse into the legendary band’s most pivotal creative periods.

From 1978 – 1995, Queen recorded off and on in Mountain Studios, based out of Montreux, Switzerland, coming up with many famous tracks for six of their acclaimed albums. Visitors have access to the control room, original instruments, handwritten lyrics, and have the opportunity to sit in the same studio chair that Freddie Mercury did during his recording sessions. You can even make your own mixes of Queen tracks from the mixing board.

Opened since 2013, the Studio Experience showcases the atmosphere that inspired many of Queen’s beloved songs. One of the main focuses of the exhibition is Freddie Mercury’s connection with Montreux and the surrounding area, which he and his bandmates considered a retreat from fame. Over the years they developed a great love for the town, and this is where he spent his final months working on his last recordings.

The Studio Experience in Montreux is put on by the Mercury Phoenix Trust, a non-profit which was created to honor Freddie Mercury and push forward the fight against HIV. This is a great cause to contribute to, and a unique way to experience and pay tribute to such a celebrated life.

In 1996 a three metres high bronze statue of Freddie was erected in Montreux on the edge of Lake Geneva as a tribute to one of the town’s most famous former residents.