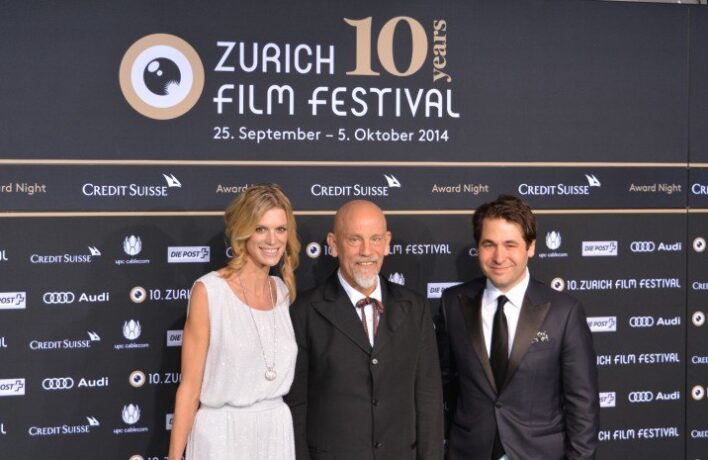 Last week I had the pleasure of going to the 10th annual Zurich Film Festival. The festival took place from 25.09 through 05.10. Unfortunately, I did not have time to attend all the events and screenings that interested me since I was busy with my studies at the university. One thing I can say right away is that I enjoyed every moment of the events which I could attend! I went to special screenings of a couple of movies, attended green carpets, was at the opening of the photo exhibition by IWC “Timeless Portofino”, visited the Tommy Hilfiger event, and checked out the Award Night of the festival.

A special highlight of the festival for me was the premiere of the Russian movie “ChB”. This film, by Yevgeny Shelyakin, won’t be released until spring 2015 in Russia, so I was very lucky to get a sneak preview. The director himself was in the theater with us, and everyone was able to ask him questions after the screening. The movie was in Russian with English subtitles. It was so exciting for me to just relax and enjoy my mother language while in Zurich. I laughed at the numerous jokes the movie offered and enjoyed the company of other Russian speakers that came from all over Switzerland to attend the Film Festival.

There was a green carpet laid in front of the festival centre where all the Swiss and international filmmakers and movie stars were accessible to the public, ready to take numerous selfies and give autographs. Amongst the stars in attendance were John Malkovich, Antonio Banderas, Benicio del Toro, Josh Hutcherson, Rene Russo, Cate Blanchett and Diane Keaton. I found it so nice that this festival was made for average people and that the organisers took into account everyone’s interests and needs. Everyone could see his favourite actor/actress, enjoy a cup of coffee on the comfy sofa at the festival centre, buy some Zurich Film Festival merchandise, or take a picture on the green carpet and feel like a movie star;)

The Award Night was really magical! It took place in the Opera House just a few steps away from the festival centre and central cinemas in Zurich. Many of the guests were very nicely dressed; I saw many chic evening gowns paired with lovely accessories. The performance, moderation and speeches were very inspirational and made me once again believe that everything is possible if one works hard to pursue the most daring dreams.

Thank you, Zurich Film Festival! It was incredible, glamorous and inspiring!