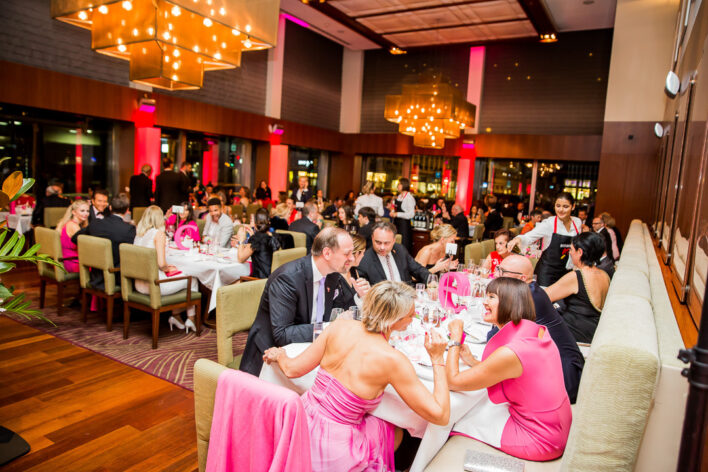 For almost 20 years Evelyn Lauder spearheaded a worldwide fight against breast cancer with numerous fundraising activities and research projects. The pink ribbon is the symbol of the campaign and symbolizes breast health. “I’d like to be able to save lives,” Evelyn Lauder when asked why she had committed her life to the cause.

The Pink Ribbon Gala Night 2018 took place in the Park Hyatt Hotel in Zurich and was glamorous, rousing and very emotional. The motto of this year’s campaign is #TimeToEndBreastCancer. The charity night supported the foundation «Look Good Feel Better» which organizes free beauty workshops for people suffering from breast cancer all over Switzerland, helping women to boost their self-confidence.

An exclusive dinner was prepared by the Swiss top chef Anton Mosimann, an elite international chef and holder of the Order of the British Empire award. He’s been known to pamper the British royal family and celebrities around the world. The dinner was full of surprises, live music, a blind auction, thought-provoking interviews and charming moderation by the Swiss media personality Sven Epiney.

The Pink Ribbon show offered a dense program with songs by the Swiss singer-songwriter Bastian Baker; an entertaining live auction with attractive lots from such companies as Bucherer, PKZ Men & Women, Maurice Lacroix, Fairmont Palace; the drum ensemble Stickstoff; a speech by the general manager of Estée Lauder Switzerland Maike Kiessling and the official presentation of the check of 80,000 CHF that was raised during the night from the auctions and donations to the Look Good Feel Better foundation.